A chord is like a scientific instrument probing the universe 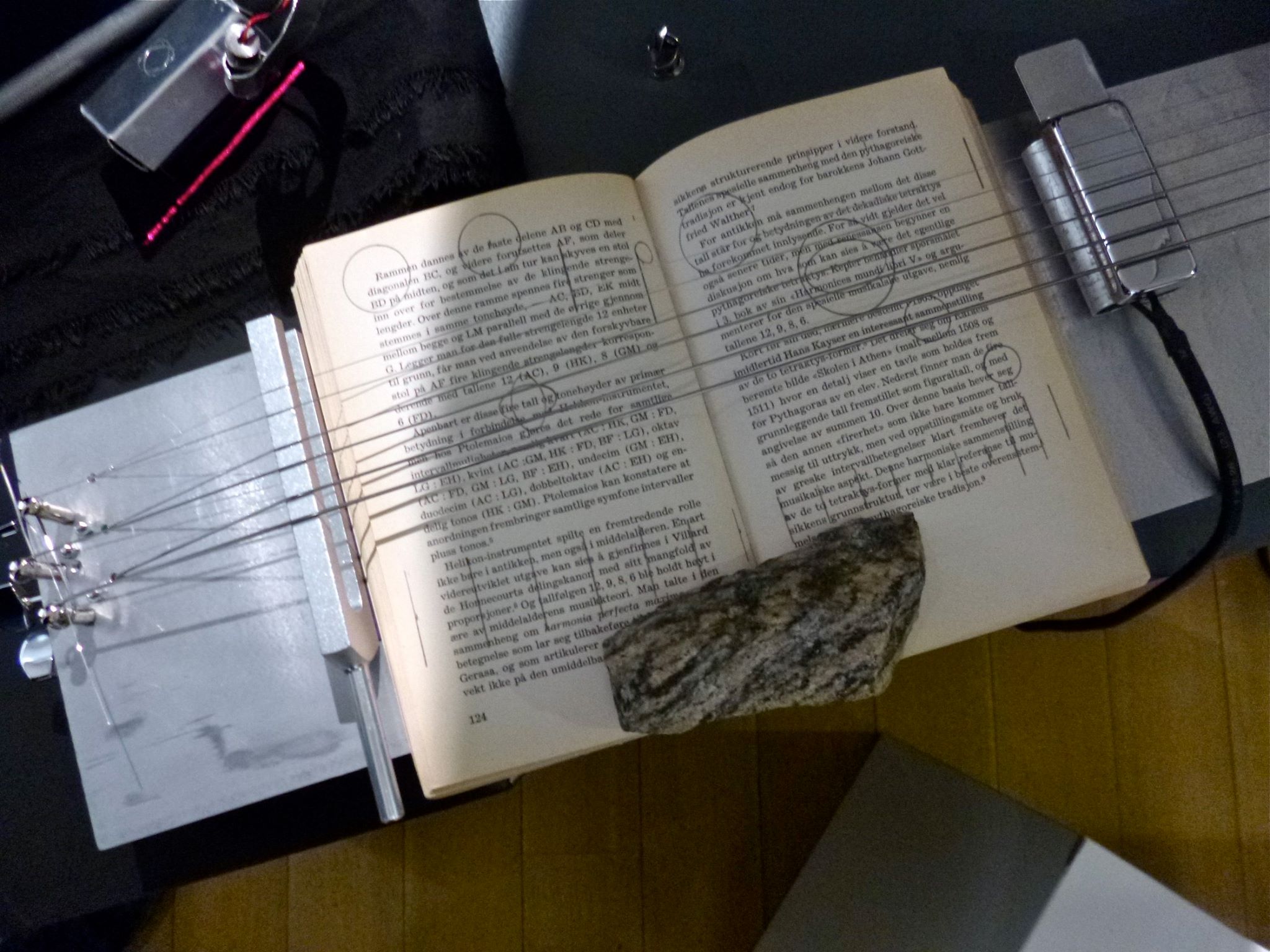 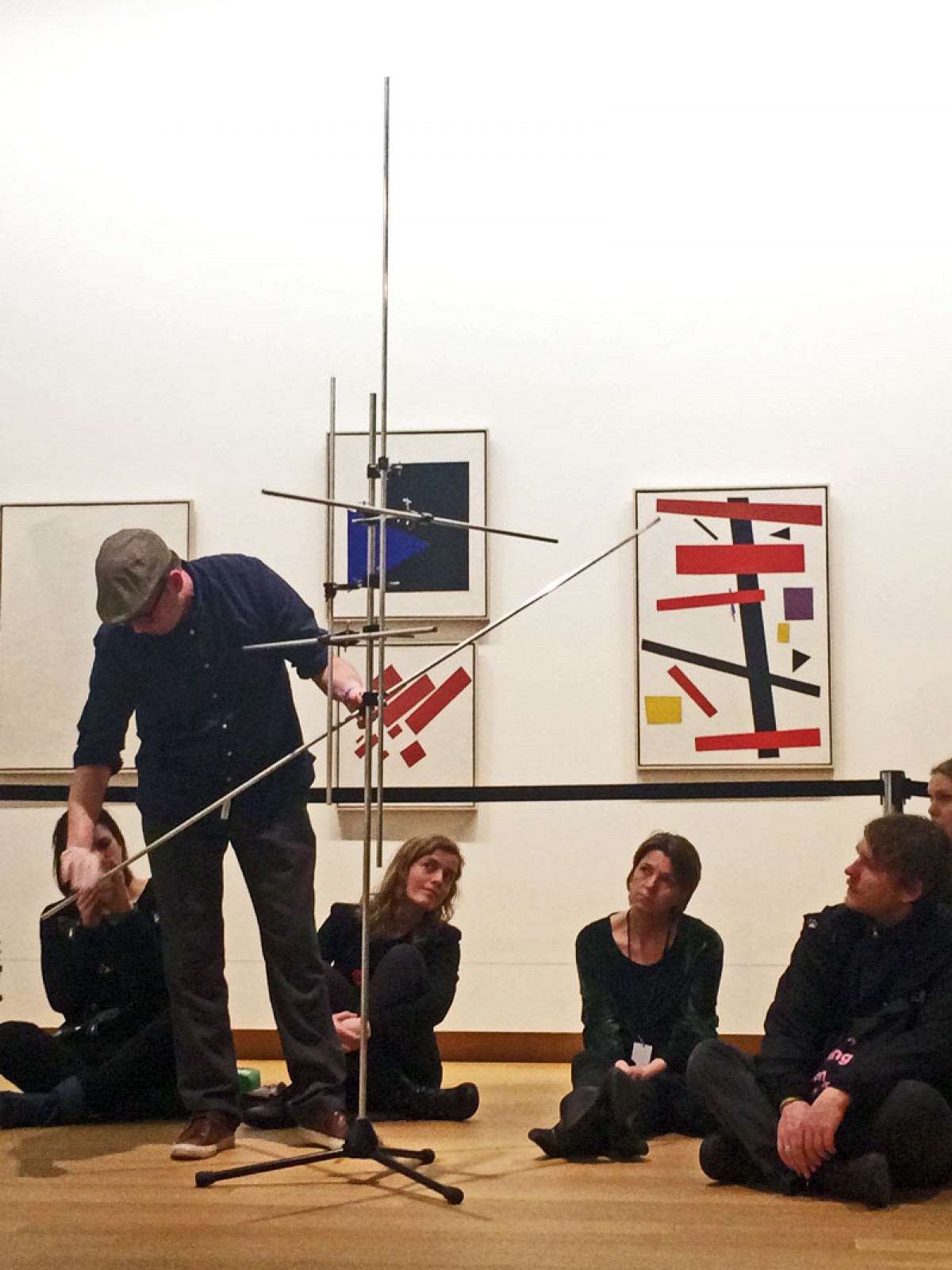 <p>Hesitatingly plucking, the sparse ringing tones echo the tonality of bells, with the formants gradually fading into drawn out ululations. He moves from plucking, to running a slide over the strings. A laser beam mounted on the slide shines down on the pages, where he has sketched sharp straight lines to represent the frets, and circles for tonal movements. Each hand drawn score indicates a different modal tuning system based on the equal ratio tuning system of <a target="_blank" rel="nofollow" href="http://en.wikipedia.org/wiki/Pythagorean_tuning">Pythagoras</a>. The book is a copy of Pythagoras’ music theory de-accessioned from Eide’s local library in Bergen, Norway.</p> <p>He begins to layer the sounds, creating a chorus of voices from cavernous depths: a choir of rock and soil, hum and steam, roar and crumble. Harmonically related, yet in non-western tuning, the texture beats against itself until Eide filters out the mid-tones and reduced the bit resolution. The choir becomes a distant rattling crackle with occasional comet-like glissando’s reminiscent of the sounds of the cosmic radiant ionosphere.</p> <p>Leaving the loop to gradually fade away, Eide moves to the sculptures of aluminum dowels that echo the forms of <a target="_blank" rel="nofollow" href="http://en.wikipedia.org/wiki/Pythagorean_tuning">Malevich</a>’s supremacist paintings hanging in the background. The dowels are cut to equal ratios to echo the Pythagorean tuning system.</p> <p>He loosens the structure, and rotates the poles so that they are no longer parallel, running his hand over the metal to set off a resonance. Moving around the structure, he sets off harmonic relationships on horizontal and vertical planes, so that we hear overtones moving and fading through time, creating ghost notes and rhythms inside the timbres. He swings a loose pole in the range of the others, interrupting the phase of the frequencies and causing irregular patterned beating before adding sticky paper to the end of the poles, to create roughening the smooth sine tones.</p> <p>Eide told me that he usually plays these sculpture on mountaintops in Norway, letting the sounds ring out through the trees. Here, he plays with theory and structure, articulating theory by reading words in music. Gradually adding noise to knowledge and the sound of pure tones, the work “a tuned chord is like a scientific instrument probing the universe” emulates a kind of echo-location of tuning, feeling out possible harmonic and formal relationships.</p> <p>Alyssa Moxley<br> www.alyssa-moxley.com</p> <iframe frameborder="0" allowfullscreen="1" width="640" height="360" src="https://www.youtube.com/embed/rZS95iyR4lU"></iframe> <br><br> A online review of the whole event from Metropolis M <a target="_blank" rel="nofollow" href="http://metropolism.com/reviews/sonic-acts-2015/">here</a>.